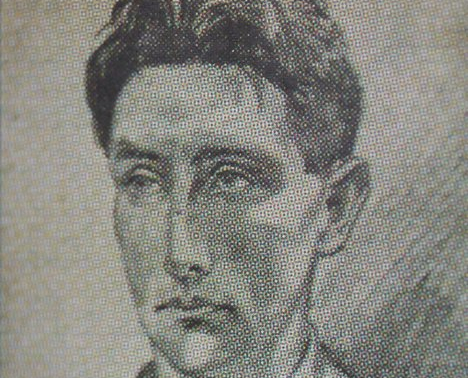 Historian Brian Hanley outlines the career of George Gilmore, which was marked by a commitment to advancing the politics of socialist-republicanism.

George Gilmore was born in 1898 near Portadown, Co. Armagh but grew up in a middle-class Protestant home in south county Dublin. His father was an accountant for several of the major Unionist landlords in Ulster, but George, and his brothers Harry and Charlie would become prominent members of the IRA.

George Gilmore joined the Fianna (the republican scouting organization) as a teenager and played a minor part during the Easter Rising, stealing his father’s shotgun and firing shots at troops in Howth. By 1920 he had graduated to intelligence work for the IRA in south Dublin. He took the Anti-Treaty side in the Civil War but was very much a rank and file figure, uninvolved in the major political debates before conflict broke out. However after his release from prison in 1923 he began to become more prominent as the IRA reorganized itself in Dublin.

Gilmore gained a reputation as a physically brave volunteer and became renowned within the IRA when he masterminded the escape of republican prisoners from Mountjoy in November 1925. Disguised as a Garda and claiming to have several ‘poachers’ in his custody he gained access to the prison, helped hold up staff and successfully released 19 men. A year later he sprung another IRA man from Dundrum Asylum. As a result, Gilmore was a marked man and in November 1927 he was captured after a clash with Gardai during the annual Armistice Day protests. He was jailed for 18 months, and refusing to cooper- ate with prison authorities or wear prison uniform, he endured harsh conditions, including beatings. After a ten-day hunger strike he was granted the right to wear his own clothes. On his release, Gilmore began to work with fellow socialist Peadar O’Donnell as a number of IRA men attempted to move the organization leftwards.

By the late 1920s the Gilmore brothers dominated the IRA in south Dublin: Harry was O/C of the area and Charlie was unit quartermaster. George was also on the national leadership of the organisation. In 1930 Gilmore travelled to the USSR and spent some months there. He remained a hate figure for the Special Branch, who believed that as a senior IRA intelligence officer, Gilmore had carried out killings of informers. In April 1931, Gardai discovered an arms dump near Gilmore’s home and arrested him and his brother Charlie. As well as weapons, documents relating to the IRA’s links to the Soviets were also found.

The Gilmores were sentenced to five years in prison after a defiant performance in court where George refused to disavow force until ‘‘British imperialism and its ally Irish capitalism’’ were over-thrown. Once again he refused to obey prison regulations and spent the winter of 1931 in Arbour Hill prison clad in a blanket. The Gilmores were among a large number of republican prisoners, captured during the Cumann na nGaedheal government’s clampdown on the IRA. Luckily for George in March 1932 Fianna Fáil came into government, and after the new Minister for Defence, Frank Aiken had visited him in his cell at Arbour Hill, all the IRA prisoners were released.

Gilmore was now a member of the IRA leadership but he was increasingly worried by the organisation’s lack of a clear social policy. Though very popular with the republican rank and file, and always in demand for commemorations and rallies, he disliked public speaking. He had been impressed by the organisation’s radical Saor Eire policy programme of 1931 and wanted it revived. He thought that the IRA was becoming a ‘safety-valve’ for Fianna Fáil and threatened to resign from the leadership, but was persuaded to stay on. Despite his worries, Gilmore was part of an IRA delegation that took part in talks with Frank Aiken during 1932. Then when visiting Kilrush, Co. Clare in August that year, where republicans had intervened in a strike, Gilmore was ambushed by detectives, beaten and shot. The case gained nationwide attention and the Gardaí involved were dismissed, provoking a crisis in the force. Gilmore recovered, but unlike O’Donnell, was pessimistic about the prospects for revolutionary change, fearing that the IRA had missed its opportunity.

“By 1934 Gilmore was frustrated that the IRA was not taking a more aggressive line towards the Blueshirts, who he saw as the spearhead of Irish fascism…”

In April 1933, amid a wave of anti-communist feeling, stoked up by the Catholic Church and right-wing establishment, mobs attacked the headquarters of the Revolutionary Workers Groups in Dublin. Charlie Gilmore helped defend the communists, firing on the attackers. He was arrested but disowned by the IRA. His brothers came to his defence, causing bad feeling within the organisation.

By 1934 Gilmore was frustrated that the IRA was not taking a more aggressive line towards the Blueshirts, who he saw as the spearhead of Irish fascism, and seemed to be avoiding the question of forming a new political party. At the March 1934 IRA army convention he supported O’Donnell’s call for a Republican Congress. When their motion was defeated, the two men left the meeting. Gilmore had to return, however, to tell delegates who insisted on electing him back onto the IRA executive that he was leaving the organisation! Alongside other left Republicans, including O’Donnell and Frank Ryan, Gilmore threw him- self into the new Republican Congress, taking up a position as its secretary and speaking at meetings across the country as well as taking a leading role in the revived Irish Citizen Army.

Gilmore was one of those who were caught up in the fighting at the Bodenstown Wolfe Tone commemoration in June 1934, when IRA stewards attempted to prevent Congress banners being carried. He would, many years later, describe this incident as indicative of a wider political malaise within the IRA:

“The weakness in the I.R.A’s ‘non-political’ attitude came sharply into focus in the assembly held at Bodenstown in 1934 when a body of Belfast workers from the Shankill and Ballymacarret areas found themselves confronted by a cordon of I.R.A. men with orders to prevent them from marching unless they agreed to keep their banners furled.

“The Belfast men came as representatives of Republican Congress groups, and their banners bore the words ‘Wolfe Tone Commemoration 1934, Shankill Road Belfast Branch. Break the Connection with Capitalism!’ and ‘James Connolly Club, Belfast. United Irishmen of 1934.’ It was ‘Come on, the Shankill!’ as they battled their way to lay a wreath at Tone’s grave. Many of the I.R.A. lads broke ranks and came back and marched with the Congress groups. After that it was an easy descent into purely destructive bombing campaigns and the association with Hitler in Europe and O’Duffy in Ireland.” (Preface to the The Irish Republican Congress, 1978)

In 1935 he was embroiled in similar scenes at Bodenstown and in 1936 was injured when right-wingers attacked the Congress contingent at the Dublin Easter commemoration. None of this aided recovery from health problems developed during imprisonment. He was also badly affected by the death of his fiancé, Congress activist Cora Hughes, from Tubercolosis.

Gilmore supported O’Donnell when the Congress split in late 1934, arguing that a broad front of republican forces, rather than a new socialist party was necessary. He spent eight months working for Congress in the United States during 1934-35. Despite his wariness about the prospects of success, Gilmore wrote ‘The Irish Republican Congress’ published during 1935, which explained the origins and politics of the organisation.

When Congress became effectively defunct, Gilmore continued to cooperate with O’Donnell, raising support for the Spanish Republic and trying to aid republican unity efforts. At Easter 1939 he denounced Nazi attempts to influence the IRA, brushing off attempts to intimidate him. In 1940 with O’Donnell he published an appeal in support of Irish neutrality. Gilmore was never central to political activity after the late 1930s, though he retained contacts with both republican and socialist organisations. During the 1960s, as the IRA reflected again on its own history, Gilmore gave lectures on the lessons of the 1930s and was seen as a key link to their Republican Congress heritage by new IRA leaders such as Cathal Goulding and Sean Garland. Gilmore wrote for the United Irishman and his 1966 pamphlet Labour and the Republican Movement provided an attractive, if contentious explanation for the failure of the left-republican project during the 1920s. Like O’Donnell, he supported the movements against the Vietnam War and Apartheid and supported the Campaign for Nuclear Disarmament. However after the outbreak of political violence in Northern Ireland he largely kept a distance from the competing republican and left-wing organisations. George Gilmore died in Howth, aged 87 in June 1985.

Article published in LookLeft Vol.2 No.8