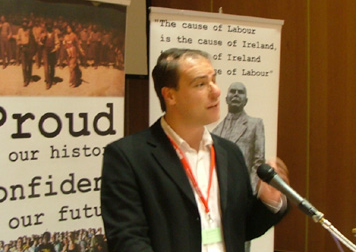 It’s easier to just keep your head down is the creed adhered to by most TDs in Leinster House. On budget day in early December, one newly elected TD bucked the trend and put his above the parapet, Kevin Brannigan met with Patrick Nulty to find out why.

Patrick Nulty comes from the working class estate of Corduff in the Dublin West constituency. For political trainspotters the constituency is Central Station, comprising as it does such political ‘heavyweights’ as Labour Party deputy leader Joan Burton, Fine Gael Minister Leo Varadker and Joe Higgins of the Socialist Party.

When Nulty was elected in a by-election brought about by the death of former Finance Minister, Brian Lenihan, in late October, 2011, he became the first politician from a sitting Government party to win a by-election since 1982. He duly kept the lime-light shining on his constituency by voting against the December 2011 budget and in doing so was suspended from the Parliamentary Labour Party.

He was only six weeks in the Dail. Having barely made himself at home in his new office Nulty was on the move again, exiled to the basement of Lenister House with other Government party dissenters.

A year into the Coalition Government’s term Patrick Nulty seems more at ease than other Labour members, content that the actions of his party can’t be used as a stick to bash him with. Some could say for a young man making his first moves in national electoral politics his vote against the budget was a shrewd move, a guarantee that he can look voters in the eye come the next election and not have to apologise for the actions of his party in Government.
It’s an accusation that seems to irritate the otherwise softly spoken, Nulty.

But surely he must have known when he took his seat in the Dáil that it was going to be a harsh budget?

It’s what he said though during the election that has left some people questioning if he was being totally honest with the electorate. During one candidate discussion, on the Vincent Browne show, Nulty assured voters he would always vote along with the Labour Party. Whilst on his first day in the Dáil he seemed to reiterate this position from the plinth outside Leinster House.

This though, is not how Nulty recalls it. “I didn’t say that on the plinth. I said the Labour Party would not support cuts on social welfare rates and I wouldn’t be voting with Fianna Fáil on an opportunist motion.”

Nulty’s first day in the Dáil caused quite a stir in the left wing blogosphere, when just a few days on from having victoriously waved a Starry Plough at the election count centre he now voted to approve a further €700 million pay-out to bank bondholders. Again it’s something he contests.

“On the first day in the Dáil I voted on an alteration to the order of business I did not vote to give Anglo Irish bondholders a single penny. I voted with the Government on the length of time which [that measure] would be debated.”

Semantics may perhaps be at play here but it confirms that Nulty didn’t come rushing into Leinster House with a view to rebelling straight away. He was willing to conform and try to shape things from the Government benches.
Having only lasted six weeks ‘on the inside’, the 29 year old couldn’t last any longer. His loss of the party whip has left him feeling that there isn’t enough power or democracy in the Dáil chamber.

“There are a lot of good parliamentarians and others in the Labour Party who are very critical of austerity but because of the nature of the Irish whip system you’re either in or you’re out. Look at the House of Commons, (British Parliment) where there’s a great tradition of ideological argument and even Tories or Labour who fundamentally disagree with each other respect ideological debate and that’s not there at the moment in Ireland because we have such a rigid whip system that doesn’t allow debate and we need to reform that.”

When I ask him for his views on his party leader his answer is diplomatic but revealing. “I think Eamon Gilmore in his heart is a man of the left but I think the policy agenda he’s pursuing is wrong.”

Replace the words Eamon Gilmore for those of ‘Labour Party’ and Nulty’s sentiments remain the same. He believes in the Labour Party and contents that its membership can steer it down a more progressive road back to what Nulty describes as ‘’traditional Labour Party values’’.

He is adamant that he and any other dissenters from within won’t face expulsion and reels off a list of party members, including President Michael D. Higgins, who over the years have all criticised Labour Party policy.

He leaves out mentioning Militant but then reasons that they were a party within a party and were kicked out for breaching certain rules. It’s not a road he wants those on the left of labour to travel. He says there is no such section as ‘Labour Left’, but then qualifies that with “at the moment.’’

He also contends that what he is arguing for is ‘’quite moderate, what you would consider mainstream social democratic politics.”

But Nulty feels that in Labour parties throughout Europe, Social Democracy is no longer the dominant ideology.

“I’m proudly and unapologetically a socialist I believe in a radical redistribution of wealth and power in our society, but what we need at the moment is rational left arguments. Social democratic parties across Europe have bought into neo-liberalism and that’s why they’re suffering electorally they’re implementing austerity and the people they represent are hammering them.”

Previous attempts to push the Labour Party on a more left trajectory have failed, it remains to be seen if this latest push from within can have the desired effect.