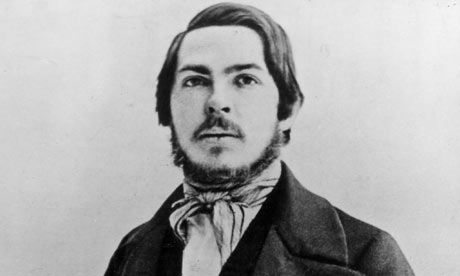 Friedrich Engels seems fated to be overshadowed by Marx, but that does a great injustice to one of socialism’s greats, writes Aindrias Ó Cathasaigh, author of a new biography of the German socialist.

It can be hard to get sight of Friedrich Engels as he still remains in the shadow of his great comrade Karl Marx. That’s no great surprise because, after all, that’s one hell of a shadow. But consigning Engels to a mere supporting role is not only unfair on the man himself, but obscures a powerful contribution to socialist theory and practice.

The fact is that, in crucial aspects of what came to be known as Marxism, it was Engels who led the way. “I always follow in your footsteps”, Marx wrote to him in 1864.

Sent from Germany to run his father’s sewing threads mill in Manchester, Engels got to know the new working class created by the industrial revolution. He attended meetings and reported on activities of the Chartists and early socialists, and learned that this class, as well as suffering under capitalism, fought back against it and could replace it with a new society. All this while Marx was still struggling to find a way beyond the injustices he was uncovering.

Marx’s analysis of the capitalist economy was central to his whole politics, but he himself acknowledged that it was a “brilliant sketch” by Engels that set him on that path. While he was later a bit diffident about his youthful venture into economics, Engels’s essay still knocks your average economist into a cocked hat: “So long as you continue with today’s unconscious, thoughtless way of producing, left at the mercy of chance, so long commercial crises will remain; and each succeeding one must become more universal and therefore worse than the one before”.

Engel’s support for Marx down the years is well documented, but went much further than the petty cash he used to pinch from the office for the Marx family in London. Whenever Marx hadn’t the time, knowledge or language skills to write articles Engels regularly obliged, happily leaving Marx to take the credit and the fee, and taking the secret of their authorship to his grave. His personal and political comradeship was invaluable in keeping Marx going through the long years when revolution seemed out of sight.

In a way Engels’s finest hour came after Marx’s death. When he characterised himself as “second violin” to Marx and expressed misgivings at taking over the lead, with genuine humility he also recognised the reality that he could never match the deep philosophical insight his friend had shown. But into his sixties and seventies Engels repeatedly offered advice and analyses that are still compelling.

There’s no doubt that he got carried away with the electoral success of the German social democrats in his last years, when the party’s opportunism had yet to come to the surface. He always insisted, though, that the ballot box only mobilised the forces that would have to face down the enemy in revolution. Party leaders did their best to hush up such a view but, he told them, “no party in any country can condemn me to silence when I am determined to speak”.

Socialists in Ireland should be aware that, in a sense, Engels is one of our own. There is the personal side, the fact that the loves of his life were both Irishwomen, that his favourite dinner was Irish stew, that he gave as his motto in life “take it aisy”. But beyond that, Irish politics and history played a significant role in shaping his view of the world.

In the political landscape of the 1840s, Chartism and workers’ revolts in France and Germany shaped his socialism, but so did movements for national independence in Poland and Ireland. The mass movement to repeal Ireland’s forced union with Britain impressed him might- ily, much as he cursed the conservative leadership of Daniel O’Connell: “Give me two hundred thousand Irishmen and I will cast aside the entire British mon- archy.”

His early classic The Condition of the Working Class in England bears the signs of his relationship with Mary Burns. Engels’s second-generation Irish girlfriend, a former factory worker, brought him to the poorest districts of Manchester where the Irish lived, and his accounts of their poverty are still disturbing. Even one of the book’s weak points, its negative stereotyping of the Irish, may well owe something to Burns’s own jaundiced view after falling out with her father.

On a trip to Ireland in 1856, Engels was shocked by the post-famine poverty of the country, and the profusion of police, soldiers and officials underlined “that the so-called freedom of English citizens rests on the oppression of the colonies”. With the rise of Fenianism in the 1860s he was prominent in winning solidarity among British workers, while privately critical of “the stupidities that happen in every conspiracy”. Returning to Ireland in 1869 he found the country just as militarised, but with a growth in commerce: “The worst with the Irish is that they become corruptible as soon as they stop being peasants and fall into bourgeois ways.”

He began writing a history of Ireland, even learning some Irish so he could consult the original sources. (Modern Irish historians, please copy!) After swot- ting up on some grammar, he told Marx that “the thing doesn’t seem to be so difficult”, and was soon correcting the mistakes of Gaelic scholars. England’s attempt to suppress the Irish had failed, he concluded, but “Ireland, through the English invasion, has been deprived of her whole development and thrown back centuries”.

He got as far as the battle of Clontarf before the pressure of other activities intervened, especially his leading role in the International Working Men’s Association. He argued strongly against a proposal that Irish members in Britain should come under the jurisdiction of the International’s British section: “If members of a conquering nation called upon the nation they had conquered and continued to hold down to forget their specific nationality and position, to ‘sink national differences’ and so forth, that was not Internationalism, it was noth- ing but preaching to them submission to the yoke, and attempting to justify and to perpetuate the dominion of the conqueror under the cloak of Internationalism.”

So whenever the Irish workers’ republic is up and running, we’ll have to find a street somewhere to rename Bóthar Engels. In the meantime, the influence of Ireland on his politics should be all the more reason for us to put his socialism into practice here.

Aindrias Ó Cathasaigh is author of the biography Friedrich Engels: Saothar a shaoil, published by Coiscéim.