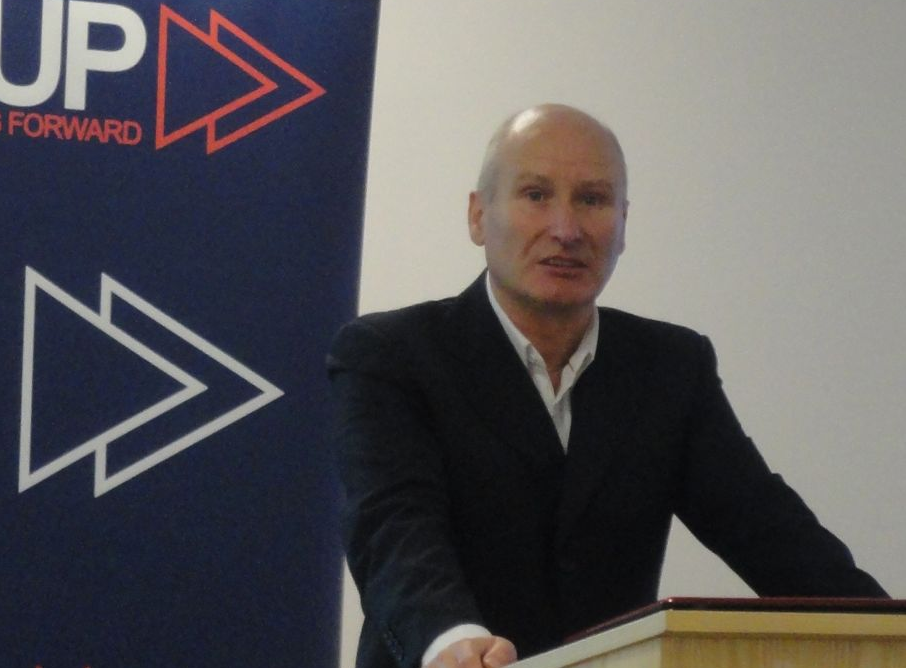 The UVF was involved in some of the most serious street disturbances Belfast has witnessed in a generation last summer, but according to Billy Hutchinson the leader of the paramilitary group’s political wing – the Progressive Unionist Party – its commitment to peace remains. Kevin Brannigan reports.

Billy Hutchinson is a complex individual. At the age of 16 he joined the youth wing of the paramilitary Ulster Volunteer Force (UVF) to, as he says, “fight against the IRA bombing us into a united Ireland”, yet he wants a united Ireland, as long as it is one within the British Commonwealth. Hutchinson describes himself as a Carsonite, after the famous Ulster leader Edward Carson, – “culturally Irish but politically British”. He maintains that he is left of centre, but, despite being readily able to quote from a range of socialists he refuses to label himself as one. “I’m well read in Marxism, Leninism, Trotskyism and all the rest of it but they’re not my politics…”

He jokingly describes himself as the product of a “mixed marriage”, not in a religious manner but a political one. His father was a Labour supporting socialist while his mother was an ardent Unionist. You can see how the genes intertwined to produce the PUP leader.

The former UVF prisoner, who served 15 years for his part in a sectarian murder, is proud of graffiti recently daubed on a Belfast wall that read ‘Polish Unionist Party.’ The slogan, meant as a slur on his party, he believes affirms that the PUP is doing all they can to try and fight racism and sectarianism in their areas.

With such political complexity Hutchinson, who took over the PUP leadership in October, is far removed from the tabloid stereotype of reactionary Loyalism – firing semi-automatics into the air whilst surrounded by bull dogs and cheering crowds, to the strains of Tina Turner’s ‘Simply the Best’. Hutchinson seeks to represent another side of loyalism, a progressive side that wants to contribute to society and in the PUP leader’s words “help pull working class communities up by their boot straps rather than contribute to keeping them down.”

Referring to an episode of Danny Dyer’s Britain’s Hardest Men, which featured former rival Loyalist leader Johnny Adair, who fled Northern Ireland after several bloody feuds, Hutchinson acknowledges that his community has often been its own worst enemy in fueling these negative stereotypes.

“We allowed the media to portray us like that. If Danny Dyer wanted to meet a hard man he should come and talk to me. Hard man doesn’t necessarily mean you go about and do those sort of bullish tactics of behaviour. It’s like being a school bully, it’s dead easy if a crowd get around some young lad and bully him, that’s not being hard, that’s a coward’s way. For me, Adair and people like that, that’s why they run, they run because they couldn’t stand and fight their ground because they were cowards.”

“The positive contribution from Loyalists tends to be cut out and then we get the Johnny Adairs, the bald heads and muscles and that’s what the media want to portray, whereas with Republicans they’re all lovely in their suits, good looking women, handsome men and that’s how it’s portrayed. But when it’s us, the media don’t want to do that. They never wanted to do that.”

Hutchinson also theorises that the Loyalist stereotype was manufactured by the British State for a reason. “In my view the British security services created those people. Those people were created for a reason, they were created to fracture Loyalism and why is that? Because Loyalism is a big threat to this society, not a military threat, it was at one particular time, but it became a threat to actually uniting this island and that’s what they didn’t like.” he says.

Without representation in Stormont the PUP leader feels that his party, and its former leading figures such as the late David Ervine and Gusty Spence, are gradually being written out of both the current narrative of the North and also the history of how the troubles and peace process evolved.

“There has been a lot of revisionism that’s gone on and Loyalists have been written out of the story. I find myself as someone who was involved very heavily in the whole political process and I’ve been written out of it. There’s no mention of me being involved in that sort of stuff. I feel a bit like Trotsky, I just keep waiting for the ice-pick in the back of the head.”

For all of his talk of perceptions and negative imagery, it is not difficult to know when you have entered Hutchinson’s heartland of Loyalist North Belfast. As the taxi edges further from Belfast City centre, past Crusaders Football Ground, the bright orange UVF flags become more prominent before they finally engulf every lamp-post. The hall in the Mount Vernon estate (an estate free of banners or flags) in which I meet Billy has a UVF mural painted on the gable wall. They’re still, it seems ‘Prepared for Peace, but Ready for War.’

A Belfast Telegraph columnist once labelled the PUP the “UVF’s thinktank”, a remark Hutchinson labels as disparaging, though it would seem he has assumed power to bring the paramilitaries and PUP closer together. Hutchinson insists that he and his party are doing everything they can to bring about the ‘civilianisation’ of the UVF and Red Hand Commando (RHC), but others are placing roadblocks
in their way.

“I think the reason that the UVF and RHC are still here is because we have had people who have worked against them being where they should have been by now. We have been working with this for four years. We should have had it completed in two but the reason why it wasn’t is because we have had the security services interfering, and now we have the PSNI who have been interfering with the Historic Enquires Team and supergrass trials.”

“From that point of view we have been held back. What I have said as PUP leader is that our focus will not be distracted no matter what the PSNI do, or what politicians or the Northern Ireland Office do to distract us.”

Hutchinson isn’t intentionally trying to build up a sense of Loyalist communities being under siege from a state they once regarded as theirs, but it is a picture his words begin to paint, especially when talking about the police.

“The difficulty, particularly in this community, with the police is the police have been involved in creating agents for supergrasses and what that causes is a legacy of policing which means that people then find it very hard to report anything to the police because what they’re saying is, if we report this to the police who are they going to tell?”

In Hutchinson’s view the new Northern Ireland promised in the Good Friday Agreement hasn’t come to fruition. “I would be very supportive of the peace process and supportive of the political dispensation that we have in Stormont and I think that’s what we need to keep and we need to argue for it, but our difficulty is that it looks like we have elected orange and green Tories…They’re interested in creating a shared-out future, not a shared future. In other words, they’ll share it out and they’ll give the Prods a bit and they’ll give the Catholics a bit. You can’t do that, because that will continually lead to what we’ve already got and that is; we’ll look over each other’s wall, well we don’t look over each other’s wall because the [Peace] wall’s too high, but what we think is the grass is greener on the other side and they get everything and we get nothing.”