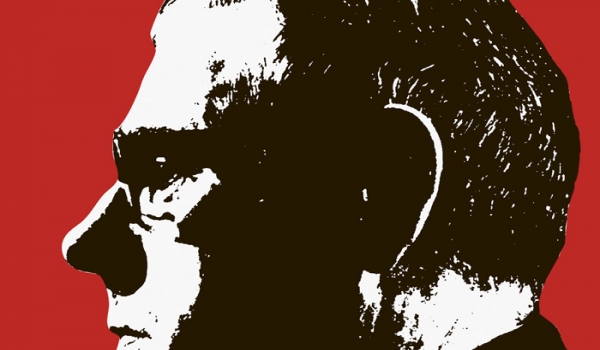 The name of Máirtín Ó Cadhain is better known than his work and political activity. Here his biographer Aindrias Ó Cathasaigh discusses a writer and fighter worth listening to.

Máirtín Ó Cadhain (1905- 70) is someone many people have heard of, but usually only one aspect of him. People might speak of him as a leading writer in Irish, as a long-standing republican, as an Irish language activist, or as a socialist.
He was all of these things, of course, and this gives an idea of the range of his activities. But all too often, those who discuss Ó Cadhain come away knowing only bits of him instead of understanding the totality of his work.
His interest in republicanism was sparked by reading An Phoblacht at teacher training college. Back in Connemara, he joined the IRA and rose through the ranks until the bishop of Galway sacked him from his teaching job in 1936. Moving to Dublin, he was elected to the army council, but resigned from it in protest at the bombing campaign in England: “he considered political freedom without economic freedom useless”, he told them. Nevertheless, he was interned for most of the second world war with other republicans. They were fatally weakened by the rise of Fianna Fáil, but an attempt by Ó Cadhain to sketch out a new political course for the movement was met only with accusations of betrayal. He had no involvement with them after his release, and often spoke bitterly of republicanism, although throughout the 1950s he stood against Catholic church dominance in the southern state. He later returned to an uncompromising republican faith. “Is poblachtach mé féin”, he affirmed. “Níor ghéill mé ariamh do na Státaí atá sa tír seo agus tá súil agam nach ngéillfe.”1
From the start Ó Cadhain’s writing was characterised by a powerful use of Irish steeped in both the spoken tradition of Connemara and the classical literature. A far from romantic view of Gaeltacht life emerges from his stories, with a stark portrayal of the hardships of small farming. While his fic- tion rarely dealt explicitly with politics, his political attitudes are often evident in it.
His classic novel Cré na Cille touches none too subtlely on contemporary controversies, and bursts the bubbles of class pretension among its characters. The hopelessness of existence on a few miserable acres is mirrored in his stories of alienated office workers trapped in the confines of a dehumanising system. The suffocating constraints placed upon women are a constant theme in his writing. Ó Cadhain succeeded better than anyone in producing modern literature which integrated international philosophical influences in an unashamedly native idiom.
Ó Cadhain’s activism to defend the Irish language started with a bang in the 1930s when he led Muintir na Gaeltachta, a neglected case of social agitation on the part of republicans. Their demand that ranchers’ land in Meath be given to landless families from Connemara met with success in the establishment of the Ráth Cairn Gaeltacht.
Members of the group went to prison as part of a campaign of illegal fish-ins to demand public control of waters owned by local landlords. The language question was fundamentally a social one, Ó Cadhain insisted: “Ní tárrtháilfear an Ghaeilge gan an Ghaeltacht a thárrtháil, agus ní tárrtháilfear an Ghaeltacht gan an talamh.”2
In the 1960s, far from settling down to the academic moderation befitting his job as a lecturer in Trinity College, Ó Cadhain embarked on a bitter struggle to defend the language. He saw the Gaeltacht in clear class terms, with a respectable English-speaking middle class strangling the working people’s language: “Caithfear an mheánaicme seo threascairt, an nathair nimhe seo”.3 He called for a ban on sales of property in the Gaeltacht where this would jeopardise the position of Irish.
He was a leading light in Misneach, which fought tooth and nail for the language. He organised a midnight picket on Taoiseach Seán Lemass’s home, which succeeded in winning the release of Connemara fishermen jailed for refusing to pay rates. A government white paper on Irish was scuppered when Ó Cadhain got hold of a copy and leaked its meaningless banalities.
He took on the increasingly influential enemies of the language, refusing to be bound by any Queensberry rules. But he also excoriated the feeble respectability of the mainstream language movement, calling for revolutionary methods: “Níor smaoinigh muid fós ariamh in Éirinn gur gá réabhlóid ó bhun go barr leis an nGaeilge a thabhairt ar ais.”4
This was all part of a marked shift leftward in Ó Cadhain’s final decade. He had taken no part in the left-wing movements among republicans in the 1930s, but was enthusiastic about the republican embrace of social campaigning in the 1960s.
He proclaimed open sympathy with Marxism, and saw Irish more and more as one aspect of a broader revolutionary struggle. His involvement with the Gaeltacht civil rights movement crystallised this perspective, and he told Irish speakers that they had to embrace socialism:
An charaíocht a bhainfeas Éire d’Fhianna Fáil agus dá leithéidí, is féidir leis an gcaraíocht sin, ach muide dhá thapú anois, an Ghaeilge a thabhairt ar ais freisin do mhuintir na hÉireann…. Seo í Athghabháil na hÉireann, an Réabhlóid, réabhlóid intinne agus réabhlóid anama, réabhlóid i gcúrsaí maoine, seilbhe agus mai- reachtála… Sé dualgas lucht na Gaeilge a bheith ina sóisialaigh.5
Ó Cadhain saw the north explode in 1969, and welcomed mass nationalist resistance to British rule, hoping for military resistance too. He demanded that “capitalism must go as well as the Border”, rejecting the idea that the struggle could be restricted to civil rights or independence alone. The Ireland he envisaged would be “aontaithe, saor, gaelach, Éire na nOibrithe”.6
The marginalisation of the Irish language has resulted in a criminal neglect of Ó Cadhain’s work. He succeeded in bringing together a range of activities which are often viewed as separate or even antagonistic, and showed in his political activity that they naturally belonged together in an extensive fight to rebuild Irish society on radically new foundations. Now, as the need for such a transformation becomes ever more acute, is a good time for us to listen to what he has to say.

1 “I am a republican myself. I never gave in to the States that exist in this country and I hope I never will.”
2 “Irish won’t be saved without the Gaeltacht being saved, and the Gaeltacht won’t be saved without the land.”
3 “This middle class has to be vanquished, this poisonous serpent”
4 “We have never thought yet in Ireland that a revolution from the ground up is needed to revive Irish.”
5 “The combat that will wrench Ireland out of the hands of Fianna Fáil and its likes can give Irish back to the Irish people, if we grasp the opportunity now…. This is the Reconquest of Ireland, the Revolution, a revolution of the mind and a revolution of the soul, a revolution in matters of wealth, ownership and living… It is the duty of Irish speakers to be socialists.”
6 “united, free, gaelic, a Workers’ Ireland”