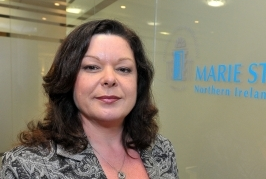 Kevin Brannigan meets former Progressive Unionist Party leader Dawn Purvis to find out what made her finally break with the UVF-connected party and why she believes it is important the Loyalist working class has its own voice.

It’s May 28 2010, and Dawn Purvis MLA, the new leader of the Progressive Unionist Party (PUP), is attending a wedding in County Donegal. Being a Friday and being Ireland, the weekend is set to be a nice break from the corridors of Stormont.

What Dawn doesn’t know though, is that across the border back in her native city of Belfast, a group of Ulster Volunteer Force gunmen are making their way up a busy Shankill Road to publicly execute Bobby Moffett, himself a leading loyalist. Their actions will eventually lead to her resignation from a party in which she had served for 16 years.

As crowds gathered around the dead body of Moffett capturing the gruesome image on camera phones, before circulating it across Northern Ireland in an obscene viral campaign, Dawn’s phone began to buzz with quote-hungry journalists desperate to hear what the leader of the PUP, seen as the political voice of the UVF and Red Hand Commando, had to say about the potentially ceasefire breaking murder. In the immediate aftermath what Dawn had to say was that the killing was “horrific” and “wrong”. In a land though where murders are so often glossed over with clichéd condemnations before moving on to the next crisis on the road to peace, Dawn’s words were soon backed up with action when she announced her resignation from the PUP, ending her leadership and casting her into the lonely world of the ‘Independent’. “My main focus in the days after the murder of Bobby Moffett was the future of the country, the peace process and where we are going with that. I felt that those responsible really had not considered the implications either for the peace process, the country or the party.
“And I sadly came to the conclusion that I didn’t believe that they ever would,” is how Dawn explains her decision to LookLeft.

“There are progressive elements inside the UVF and Red Hand Commando who have been trying to steer a path that would eventually bring an end to paramilitarism but I felt that they were seriously hampered and I felt that the PUP, and what they were trying to do – give a voice to working class loyalist communities, to try and transform those communities – was being seriously hampered.

It’s also believed that Dawn wasn’t alone in coming to her conclusion that the Moffett murder was a step backwards for the UVF, with at least one long-serving member of the paramilitary’s brigade staff believed to have stepped down in protest. In the wake of Dawn’s resignation questions were raised as to why the Moffett murder prompted her to leave when the 26 murders attributed to the UVF since Purvis joined the PUP in 1994 hadn’t. For Dawn, it’s all about the context.

“I joined the PUP after the ceasefire was called in 1994, I know some people have made much of when I joined and the amount of murders that were attributed to the UVF and the Red Hand Commando since that time.

“Yes there were horrific murders committed by the UVF during that period but I also knew that those within the PUP and the UVF were doing their best to transform the organisation away from violence and towards peace. I think when we got the statement of intent in May 2007 from the UVF it was really a change in time and context, here we had a paramilitary organisation wedded to violence and responsible for some of the worst atrocities of the troubles saying they were intending to go away and that in my mind was a very strong statement.

“It was also around the same time that devolution was restored and it gave a lot of hope to the community that on the back of all that. We also had the UVF and Red Hand Commando entering into a process that would eventually lead to decommissioning.

“So here we had an organisation that had built up some credibility. Obviously you will have people who will disagree with that and ask how can you say any organisation responsible for murder can build up credibility, but it had built up credibility in terms of ‘here’s what we intend to do and by the way we’re decommissioning’, so within that context the UVF had indicated that politics was working and that they were going away.”

She added: “I think the murder of Bobby Moffett not only undermined the credibility they had built up but also undermined the work of the PUP and people associated with the organisation that were working to bring an end to paramilitarism.

“So the context to the Moffett murder was different, it was absolutely different. And people will look at what I did and say well why didn’t you walk away earlier when others died what I say though is; different context, different time.”

While Dawn was trying to decide what her next step would be following the Moffett murder, rumour was rife that the PUP would split from the UVF and Red Hand Commando. Purvis though never saw that as a likely outcome explaining that the UVF need to break the link with the PUP by realising there is no longer a need for them to exist rather than the PUP breaking with them.

When Dawn, who has a degree in Women’s Studies, Social Policy and Social Anthropology, is asked if she ever felt excluded as leader of the PUP from the loyalist groups they purport to speak on behalf of, on the basis of her gender, she gives an interesting insight into the relationship between the PUP and the UVF. “I would suggest most UVF members are DUP supporters and would vote DUP rather than PUP and for the life of me I can’t understand why given that the DUP’s attitude towards loyalist paramilitaries over the years has been questionable to say the least.”

Such a statement from a former PUP leader shows how, unlike Republican groups, loyalist paramilitaries and their political affiliates are operating on a much longer leash.

When asked if she thought of joining any other party rather than going it alone as an Independent Dawn insists she couldn’t find a home anywhere else and wonders how the PUP’s new leader Brian Ervine (brother of the former party leader David Ervine who died in 2007), who vehemently opposes abortion, can lead a party that is pro-choice. One feels this could become a campaign issue when the two run against each other in the next election. Some had hoped Dawn’s resignation from the PUP could usher in a new era in the form of a cross-community left alliance but Dawn doesn’t seem too enthusiastic, fearing that the personal histories of its main players rather than present day positions would dominate debate and the sectarian nature of northern Irish politics providing too great a hurdle.

While Dawn’s view on the future of cross-community political alliances may be bleak, her analysis of the unionist communities’ thoughts on the current campaign being waged by the various splinter republican groups offers a little more hope.

“In other words this isn’t your fight and you don’t have to pick it as one. There are those who use it as an excuse to stick around. Loyalists don’t feel under siege but obviously when it strikes home like when there was a bomb under the car in east Belfast people were thinking ‘that’s close’. It does concern people but because of the segregated nature of our society the trouble with the dissidents seems to be internal and loyalist communities seem to be far removed from that and they don’t see it as a threat and they don’t regard it as a threat but that’s not to say our political class here will not talk it up as a threat when really they should be talking it down.”

When our interview ends Dawn walks us to the front door of Stormont past the oil painting of Ian Paisley, a man who once labelled her a ‘Communist.’ In the assembly hall they’re debating the state of the Northern Irish poultry industry. A DUP MLA wants the North’s borders closed to outside eggs and seems quite passionate on the matter. Everything changes while all else stays the same.