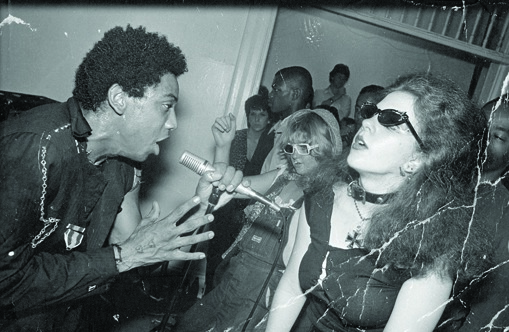 Brian Whelan interviews the authors of a new book from Verso Press exploring the complex, contradictory ways in which punk has interacted with the politics of race.

From its birth punk rock has been obsessed with identity, exploding into the mainstream in the late 70s with filth and fury proudly exclaiming ‘no future’, the movement has traveled across the globe surviving four decades and many premature pronouncements of its death.

A new book hopes to trace the history of punk rock’s racial identity, following the legacy punk has created from its origins in the white rebel music of the late ‘60s through to the thriving scenes today in Indonesia, Brazil and Mexico.

‘White Riot: Punk Rock and the Politics of Race’ brings together leading critics and personal reflections charting the deeply buried connections between race and punk. The authors, Stephen Duncombe – associate professor at NYU, and Maxwell Tremblay – drummer for the band The Sleepies, set out to produce a book that challenges the idea that punk was just a white-dominated phenomenon.

White Riot doesn’t shy away from exploring the co-opting of the culture by white supremacists or highlighting how punk, while striving to be seen as outside of society, continued to mirror dominant racial prejudices.  Punk’s white image is due in part to its role as a place for ‘white identity to form in opposition to mainstream white identity,’ Stephen Duncombe explained to Look Left.

“We’re saying there is a reason punk rock has been seen as predominantly white. We’re also trying to tell the story that from the get-go there have been punks of colour – but what happens is you have memories of punk and those tend to get whitewashed out.”

He stresses that there have always been black, latino, asian and women punk rockers, and claims that compared to the other similar scenes there were always more. However, they were still a minority. When he got into punk it was about ‘pure rebellion’ and only later began to take on its political formulations; “It was in a pre-political phase,” he says.

Maxwell Tremblay’s experience of Punk came almost two decades later, long after the initial headline-grabbing cultural explosions in London and New York. When he arrived into the punk scene the politics were seemingly already hammered out.

“It was like you walked into the shows and were handed a membership card to some sort of anarchist group or it was very lefty and progressive,” he explained.

“It was interested in anarchist thought without any historic sense of a time in punk rock when its politics were much more ambiguous and up for grabs. With their wildly differing experiences of the punk culture the authors says they are able to paint a more complete picture of how racial identity has progressed in punk culture.

Maxwell explains that “the two generational moments colliding give us the most complete historic picture of how race has been negotiated in the punk scene.”

For Stephen the failure of the left coming out of the radical upheaval in the 1960s played a big part in punk’s birth, he explains how at the time it seemed there was no vent for frustration with society.

“In the 1960s that [the left] might have given us a way to talk about our displeasure, our rage, our dissatisfaction but really right now we don’t have a vehicle, we don’t have an identity in which to be rebels,” he explains.

“We can borrow the identities of others but we really don’t have one of ourselves and we’re white and we’re pissed and we want to riot and I think that that ‘White Riot’ really captures that moment and that feeling.”

Punk gave people an outlet for their rage, it provided a cultural canvas young people could use to find their voice and express themselves and it wasn’t always pretty.  “What one did with that rage – what direction one went – was then open,” he explains.

“It could go into white supremacy and racism, it could go into the left politics that The Clash articulated or it could stay in the white nihilism ‘no future’, ‘I want to destroy the passers-by’ Sex Pistols moment.”

To understand punk you have to see it as something not frozen in time but as a tradition that existed in bands like MC5 in 1960s Detroit and in articulations like Norman Mailer’s ‘White Negro’ polemic and continues to this day.

For Maxwell taking into account the long trajectory of punk debunks the dominant punk narrative and its cultural biases ‘…that it begins in white English speaking countries and then travels to other parts of the world’.

“Theres definitely quite a bit of bourgeois white-kid fuck you mom and dad reactionary stances happening as people get into punk rock,” he explains.

“But when you look at something like the documentary Afro-Punk there are kids that find themselves at a distance from mainstream status quo black identity and the punk rock identity is a way of working through distance that they feel.” Speaking to the authors against the backdrop of the rioting that hit the UK comparisons are inevitably drawn between the ‘pre-political’ phase punk went through and the nihilistic outpouring from Britain’s underclass.

Stephen complained how people remarked that the riots weren’t political, explaining how he found they simply reflect the dominant ideas in society.“Of course they aren’t political and of course they’re looting every store because they’ve just adopted the general politics of the last 30-40s years, which is; I’m in it for myself.”

“They’re pissed off and they see that there’s no future – why would the people think that they could express a politics entirely separate from the dominant culture?”

He explains that while they express a rage different to the dominant culture in order to have a political vision that looks different they must find a new way to express it.

“Punk rock becomes a stage in which to talk these things out or yell these things out to become a much more mature way to think about race and about power…at their best these cultures can work as a platform to have these discussions.”

As a people’s history the book offers a powerful alternative view of punk, bringing to the fore its ever-present obsession with identity.

The authors believe that like all identities punk is slippery and can be adapted by anyone to take on their accents, so Bad Brains can bring reggae and their Rastafarian roots, while in Indonesia Muslim punks take a break for prayers in the middle of gigs.

In Chicago Los Crudos use the Spanish language to talk about latino issues with their overtly political style, so what was once an articulation of white rage, like all cultural forms, becomes adopted, adapted and takes on new meanings.

Punk struggled for a new outsider white identity, at its most extreme this grew into the confused idea that whites were a ‘persecuted minority’. This ambiguous idea was present from bands like Sham69 to Minor Threat but at its most extreme gave birth to punk’s neo-Nazi offshoots.

The book hopes to become the ‘ultimate reader’ on the subject and certainly offers a comprehensive view of the topic, but if you think punk’s relevance ended with The Sex Pistols you might find it all a bit pointless

For those now on the outside of punk looking back White Riot is a fascinating read. Personal reflections from punks such as the notorious neo-Nazi Ian Stuart sit in stark contrast alongside people like The Clash’s Paul Simenon.

In an overcrowded market of punk retrospectives, introspectives and anthologies, White Riot stands out as a book with a definite purpose that makes an for insightful read.