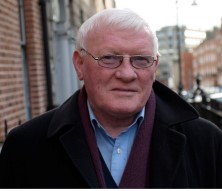 After over 50 years of involvement in political struggle Sean Garland faces one of his toughest fights. Kevin Brannigan meets the man wanted by the US.

On the evening of the 7th October 2005 Sean Garland was sitting in a Belfast restaurant enjoying a meal with Workers’ Party colleagues prior to the start of the party’s Ard Fheis, when a squad of burly PSNI officers entered the building.
“When the cops walked in it never crossed my mind that they were there for me. They were dressed like Star Wars characters with all their helmets and blacked out visors on. The sergeant was a smallish individual, while the others were giants of men,” Garland recalls.
But the group of officers were there for the veteran WP leader, sent to execute an arrest warrant issued by a secret US court in May that year. The warrant issued by a grand jury accused Garland of distributing counterfeit “super-dollars” in conjunction with the North Korean government and former KGB members in what the CIA claimed was a serious attempt to undermine the US economy.
With the British and American governments having signed a near automatic right to extradition between the two countries at the height of the ‘War on Terror’ in 2003, the US intelligence services had waited until Garland crossed the border before attempting to execute their warrant.
Garland would spend that night, not for the first time, in a Belfast prison cell. Taken to the court house the next morning Garland’s accusers lay in wait. “The cops kept telling me that the Americans were in the building and wanted to talk to me – I though wouldn’t answer, but it seemed as if the cops were getting all their instructions from these Americans.”
Luckily for Garland the law swung in his favour when the Judge demanded to see documents relating to the case from the United State’s side.
“[The Americans] weren’t expecting that at all. They had been over confident telling the Judge the documents would be sent on to him in a few days. The Judge wasn’t impressed stating that they had supposedly been working on this case for over five years and they didn’t even have their documents present… I remember one woman running around, she was the one giving instructions wondering how to deal with this new situation. They hadn’t expected a Judge who would be able to think for himself.”
Released on bail and allowed return to the Republic for medical tests, Garland was diagnosed with bowel cancer. He remained at his Navan home for treatment, and declaring that as a citizen of the Republic he was willing to be interviewed at any time by the Gardaí concerning the US accusations which he strenuously denies.
The Belfast arrest marked the beginning of another chapter in Garland’s eventful life that would see the Dubliner in his eighth decade forced to take on the world’s self-declared policeman in a struggle to remain in his homeland.

Born in north inner city Dublin’s tenements, Garland became involved in politics when he joined the IRA in 1953, having read an ad in a Republican newspaper. He soon established a reputation as an able activist within the 1950’s Republican Movement signing up as a member of the British Army in Northern Ireland in order to collect information for IRA arms raids in the build-up to the 1956-1962 Border Campaign.
It was Garland who led a ‘lorry load of volunteers’, as the ballad goes, against Brookborough RUC station on New Year’s Eve 1956, in a raid which would result in the deaths of volunteers Sean South and Fergal O’Hanlon.
But looking back at this period he says he can now forlornly see “IRA volunteers assembling weapons in back rooms while the unemployed were marching on the streets and getting a TD elected”. Garland was among the republicans, led by Cathal Goulding and Tomas Mac Gollia, who wanted to join these political strands of workers agitation and secular Republicanism. Others differed from this view and these fault lines, when put under the strain of communal violence in late 1960s Northern Ireland would lead to the Republican Movement splitting into Provisional and Official wings, Garland being to the forefront of the latter.
“There was recognition among us that capitalism was the major enemy. There had been differing things along the way like partition, British rule in Ireland, what not, but when you look back to the Republican Congress, which was another significant effort which unfortunately failed, it was clear that clarity was needed about what was the real issue, what were we really seeking to do, and I think the Leninist principles of “Educate, Agitate, Organise” became fundamental for us,” recalls Garland.
Alongside denunciations as a ‘red’, assassination attempts would also feature in Garland’s life during the turbulent decades of the 1970s and ‘80s. Despite this, and following the Official IRA’s declaration of a permanent ceasefire in May 1972, Garland’s wing of the republican movement would successfully build an avowedly socialist Workers’ Party, that by the start of the 1990’s had seven TDs and a Dublin MEP. It was in assisting the creation of this political force which Garland believes was the most significant feature of his political life. “You had a disciplined democratic party in touch with the people, we wanted to build a mass party, it wasn’t just to be an elitist group. We wanted to build a party with roots among the working class, it was to be the workers’ party, the working class was to be our base and it still remains that.”
On the pressures that would eventually lead to a split in the Workers’ Party in 1992, Garland speaks of “a sense of betrayal” but is circumspect; “the par- liamentary factor was a major problem because after a while the focus shifted from the party outside the parliament to the party in the parliament.” He also points to problems getting working class WP members to run for elected positions as damaging to the party’s development. Discussing the many former WP party cadres who have gone on to hold significant positions within mainstream politics and society he adds; “The fact is we were out to replace the system, capitalism, but that was no longer the question for those who left the Workers’ Party. They have made clear where they stand.”
He points to the Irish Labour party, whose leadership numbers several former WP members, entering coalition with the conservative Fine Gael party, and asks, “where are they going to go? This is just a case of the repetition of the history of this state since it was established. There has always been, in this country, a denial of the importance of class, they don’t like to mention class, they say your fermenting class war. There is such inequality under capitalism but all the main political parties subscribe to that system and in the main, the media hide its inadequacy.”
Garland believes the current government’s policies, and their relationship with the IMF, “is all about defending capitalism, the establishment state there is no other option but the working class of Greece, and here, are saying we have another option.” However he believes there is hope. Within the Labour Party and Sinn Fein, Garland sees an ongoing conflict between “those who wish to simply go along with the system and those who seek a class based party.”
“The left is so divided among factions The United Left Alliance, only time will tell what they build out of that, but there is no doubt there is space for a major Left party in the country. The unions, the organised working class, must also have a look at themselves and ask where are we going, what is our role in this society?”

Garland remained politically active following his Belfast arrest, although in 2008 he stepped down as Workers’ Party president. However in January 2009 his personal confrontation with the US intelligence agencies once more took over.
“I was going into the Workers’ Party office in Mountjoy Square when suddenly you had this Starsky and Hutch episode with cars pulling up and cops excitedly surrounding myself and my wife I was arrested and brought to Mountjoy Garda station – a warrant for my arrest had been issued by the High Court.”
It would later emerge that this warrant was instigated at the behest of then US Secretary of State Condoleezza Rice in the last days of the George Bush government. Over three years since his Belfast arrest Garland was once again in a cell, eventually spending two weeks in Cloverhill Prison in Dublin. “Pat Carey a former Fianna Fail Minister ran into my wife in Finglas one day and said to her not to worry that he’d visited Cloverhill and it was a fine place to be! Well he needs to take a longer look.”
“There were a lot of kids there coming off drugs, they were all really in need of treatment, they were all getting these various concoctions of pills and methadone but there was no effort to help them other than that. Talking to them most just wanted to get their life back to some kind of normal standard. They put me in a single cell. Others had three in a cell when they were made for one, it was very overcrowded.”
He was eventually released on strict bail conditions of €100,000, raised by supporters, and the deeds of his family home handed over as security, as well having to carry a mobile phone with him at all times so he can be tracked. Since then Garland has appeared in court on numerous occasions to face the US extradition demand. The end of July will again see him back for a full High Court hearing.
“The Americans were asked to provide evidence a number of times and the an- swer was ‘piss off, the evidence will be presented in a Washington court. Well if someone like myself stands in a Washington court you can kiss me goodbye, this whole grand jury system is so uneven there is no question of someone getting a fair crack of the whip.”
He added; “They just see you as an obstacle and they, the CIA and US security services, have carte blanche to do what they like.”

Facing into his next battle Garland says “in my own life I have met some very good people in the course of it, some very honest, decent people. I don’t regret how I spent my life, maybe we were before our time, there wasn’t enough awareness of the contradictions there would be between parliament and a revolutionary party, it’s difficult until you get to a point where you have a clear ideology and you know where you are going and who you’re going with…the important thing is not to surrender.”

Article published in LookLeft Vol.2 No.7