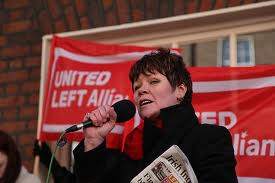 It’s a sunny Sunday afternoon; Joan Collins TD is sipping coffee on Dublin’s middle Abbey Street. A constituent stops and congratulates her on election success joyously recounting how he dealt with the Fianna Failers who darkened his door during the weeks of canvassing.

It doesn’t sound too dissimilar to how Joan herself dealt with former Taoiseach Bertie Ahern on his last day in the Dail, with the would be TD interrupting the former canary yellow suited ‘statesman’ during an interview, in which he had noted with a sigh how he wished someone had told him just what was going on in the banks.
A Youtube recording of Joan’s interruption and questioning of Ahern, “Have you no shame?’’ soon went viral and propelled the local campaigner to the forefront of the national media. “It was completely spur of the moment, if you had staged managed it you couldn’t do it. Though if it had been planned I would have been more articulate.” says Joan.

“I couldn’t believe the feedback to it, everyone I met on the doors said I wish I’d the opportunity to do it. Ahern walking away with a nice pension knowing exactly what he’d done and here he was saying the ‘Bertie bowl’ was one of his main regrets!”

A few weeks after gate crashing Bertie’s farewell, Joan found herself sitting in the Dáil chamber elected by the people of Dublin south central. Joan admits that the extra profile provided by ‘Bertie-Gate’ and the buzz surrounding the formation of the United Left Alliance (ULA) were important in the final tally but success was built was over 15 years of campaigning for working class communities, from opposing bin charges to water taxes.

She now feels the responsibility of ensuring that the “great hope from people as to what the ULAcan do” is turned into real political achievements. However Joan has found Leinster House to be an unwelcoming place for those outside the perceived establishment.

“Fianna Fáil had been there for so long they had the Dail chamber as a mirror image of themselves it was all geared towards them. It’s a very alienating environment for working class people; the prestige, the power, the protocols and all the other shite you’re meant to conform to. Lucky enough our (ULA) offices are away from it all above the Department of Agriculture offices so we only have to go to it (the Dáil) when we go to the chamber.”

Joan is a former member of Militant (which later became the Socialist Party) but is now a member of the Socialist Workers Party aligned People Before Profit alliance. She now hopes the ULA can fulfil its potential by attracting leftwing former Labour party activists and others. But as the ULA seeks to move from a loose electoral alliance to parliamentary grouping and maybe even fully fledged party Joan accepts there will be obstacles to overcome.

She points to two early debates within the ULA parliamentary group, which is itself part of the larger Dáil independent TD’s technical group ,that indicate the difficult process of developing a unified strategy among groupings which until recently ploughed separate furrows.

“The first day of the Dáil there was a debate on corporation tax and Joe (Higgins) put in an amendment to it and there was very little time to sit down and discuss it in detail. The Tipperary Workers and Unemployed Action Group (whose TD Seamus Healy is a ULA member) were opposed to the increase in the tax, not out of any loyalty to multi-nationals, but because their area relies on multi nationals for employment. So there was potentially a first issue we could have fallen down on,” says Joan. The second contentious issue was Richard Boyd Barrett’s broad front approach for a proposed referendum on the IMF/EU ‘bailout.’

“Joe and (fellow Socialist Party TD) Clare Daly didn’t want to get involved due to (rightwing Independent TD) Shane Ross’s involvement, it wasn’t a political issue for me as we saw the referendum as more of a democratic rather than ideological issue.”

As such parliamentary teething problems are overcome wider organisation and recuriting must continue, to build a broader movement Joan states- “we’re going to have ULA membership cards so when people join the ULA they’re not joining the Socialist Party or Socialist Workers Party those parties are just affiliated to it.”

Only time will tell how the ULA develops but whatever it’s clear Joan will always be more content campaigning within her local community than hobnobbing in the Dáil bar.