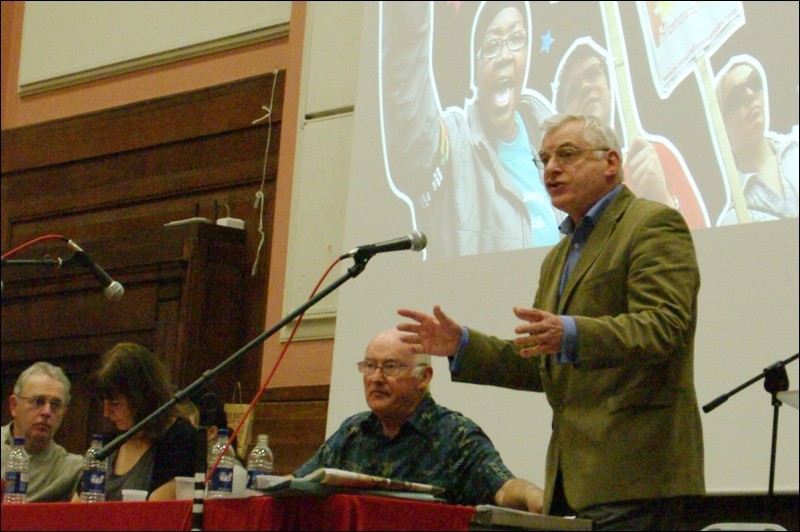 It’s just over a year since Dublin elected its first Socialist Party member to the European Parliament, Joe Higgins seeing off the challenge of incumbents Mary Lou MacDonald and Fianna Fáil’s Eoin Ryan to take the final seat.

In the months that have passed since the late night drama at the RDS count centre, Higgins has had to get used to a life a lot different to the one known to incumbents of Kildare Street.

‘It’s different to life as a T.D, I’m over in Brussels a lot and it took a bit of getting used to, but I’m still representing the same people as I was in the Dáil.’
Infamous for his retorts and speeches during his time as a T.D a quick search of the internet shows the Kerry native, once ironically dubbed a ‘failed man’ by former Taoiseach Bertie Ahern, has lost none of his polemical powers.

Having to search the internet to find Higgin’s latest pronouncements though emphasises the point made by Higgins that the lack of media focus on Brussels feeds the general apathy of the electorate towards Europe.

‘Irish people are very concerned with international issues, this can be seen during marches against war or Palestinian solidarity actions but the mainstream media don’t cover what happens in the European Parliament and this only benefits those pushing through anti – worker measures’, says Higgins.

Coming into office on a tidal wave of anti-establishment sentiment that had also seen the Lisbon Treaty rejected the first time around, Higgins’s electoral victory owes a lot to the wide base of voters attracted to the former Militant Labour, voters who in the past would have been ticking rather more conservative ballot boxes.
‘We drew in a lot of people fed up with the failed neo-liberal policies on offer from some of the other candidates, these voters may not have been socialists but it did show that a large movement can be built and there is a support base there for it.’

Building an electoral alliance of socialist forces has become a familiar theme of the Irish left. While talks to form an electoral slate for the last local elections between the People Before Profit Alliance and the Socialist Party failed, Higgins is confident that ongoing talks between left wing parties – north and south of the border – can bear fruit in the form of a left alliance for the next round of Stormont and Dáil elections.

While the left continues to try and organise itself for an election onslaught, the old forces of the right, once thought to have faded into the political wilderness following the implosion of the Progressive Democrats, have of late been making noises, in the form of failed politician Michael McDowell and former MEP Pat Cox, of making a comeback.

Higgins though cannot see why they would wish to embark on any sort of a comeback tour.

‘It’s a measure of the stagnation of establishment politics in this State that some media circles are reacting with frissons of excitement to rumours of a rebranded P.D reformation. What on earth could a political party led by this duo contribute toward a resolution of the present mess? Their policies have been proven wrong. They failed’, says Higgins.

While Higgins believes Labour will be part of the next Dáil Government, he isn’t overly optimistic about what real change that party will bring even if it comprises the majority in a coalition with one of the conservative parties. ‘I think it could be quite like the Obama situation in America right now, he was swept to power on a wave of change. American voters were fed up with the policies of the past and saw Obama as a break with the old way and a man who could bring change. They’ve been left disappointed.’

He added, ‘If a Labour Government is returned after the next election it will be because people here, like in America, want to break with the old failed policies of the past and look for a fresh approach. If Labour are to go into coalition with Fine Gael the change people want to see just won’t happen. We’ve already seen across Europe in Spain and in Greece social democratic parties implement the cuts of their masters in the banks. If Labour are to go into a coalition Government with Fine Gael, expect the same situation here.’

Asked if the Socialist Party would help form a Government with the Labour Party, Higgins lists a set of criteria that would make such a move possible. The short answer, though, is it seems very unlikely.