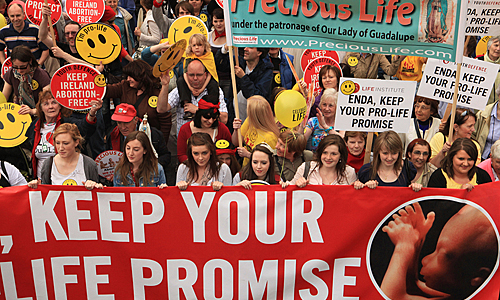 Rather than placing job creation to the fore, right-wing governments in London and Dublin are intent on pushing hundreds of thousands more people into the dole queues, reports Conor McCabe.

Northern Ireland is currently experiencing a ‘second wave’ in unemployment. The initial job losses in construction and manufacturing, and subsequent reductions in consumer spending, have had a knock-on effect in the sales and retail sector.

There has been a dramatic rise in long-term unemployment, which has doubled in the last twelve months. On top of this, the professional and administrative sectors, which until recently have been largely immune, have now started to see significant increases in those claiming benefits.

One of the reasons why professionals have not been as affected as other workers has been due to public sector employment. It is the ballast which is keeping the economy afloat. The public sector accounts for 32 per cent of all jobs in the North.

Government plans to cut public spending would affect not only public sector workers but also the private sector as such a move would shrink the economy overnight. There simply isn’t the type of business opportunities currently available to compensate for such cuts.

In a recent interview, Peter Bunting of the Irish Congress of Trade Unions said that “The reality is that the private sector is too small [in Northern Ireland] to carry the burden of massive cutbacks in public spending.”

The vast majority of jobs in Northern Ireland are in services. This includes both public and private sectors. Eighty two per cent of all workers are service industry workers. Around 10 per cent of all jobs are in manufacturing, yet this sector accounts for the bulk of exports. Northern Ireland’s private sector model of low-skill, low-paid service industries coupled with a low-employment, high-value manufacturing sector is not capable of compensating for any large reductions in public spending at this time.

Northern Ireland’s unemployment rate is currently 6.4 per cent, which is just under half of that in the Republic. Any significant cuts in public funding could see that rate move upwards.

The recent live register figures for the Republic revealed similar trends to those in the North, albeit for different reasons. There has been a comparable shift towards long-term unemployment, as well as a recent jump in professionals claiming benefits. However, whereas the increase in unemployment in the North is related to the downturn in construction and housing, as well as the international recession, the Republic’s double-digit rate of unemployment is entirely of its own making.

In late 2008 the Fianna Fáil/Green coalition undertook an aggressive deflationary policy which saw the economy shrink by an unprecedented 10.7 per cent in 2009. They have continued on this path and by doing so have undermined almost every attempt by the economy to protect itself.

One of the survival tactics which businesses undertook was to place employees on part-time hours and casual days, instead of a full five-day week. The most recent figures from the CSO showed a serious decline in part-time work, alongside an equally serious rise in long-term unemployment. After 18 months this survival tactic of short hours and casual days has finally run out of steam.

The lack of any form of government stimulus has meant that businesses which may have otherwise been able to get through the recession are now closing down. The government’s determination to deflate the economy at all costs has had the effect of killing what were viable, if struggling, businesses.

This has serious repercussions for the medium-term future of the Republic’s economy.

Instead of being in a position to hire staff and extend hours once the economy picked up, those businesses are now gone. This means that in order for unemployment to drop, hundreds of new businesses need to be created from scratch all over again.

The capital costs involved in creating new jobs – costs which could have been avoided had the government undertook a stimulus rather than a deflationary approach – will have to be sourced from a broken banking system, propped up with taxpayers’ money which was sourced through the very strategies which led to the wholesale liquidation of businesses in the first place.

In March 2010 there was an estimated 1.8 million people at work in the Republic. Since then, over 500 businesses have become insolvent. The credit crisis damaged the economy, but Fianna Fáil and the Greens have done their best to kill it ever since.
And as far as hundreds of Irish businesses, and thousands of employees, are concerned, they have succeeded.