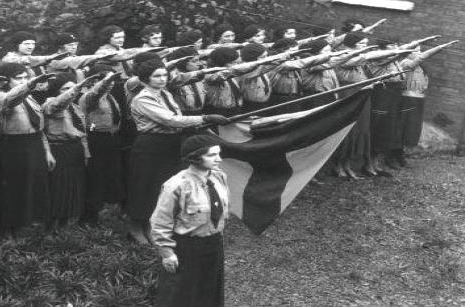 “They are simply, if you like, being anti-democratic; it’s almost fascist,” is how MEP Jim Higgins scolded his Fine Gael colleagues when they attempted a June putsch against party leader Enda Kenny. It was a dangerous charge to level at members of an organisation that once admired European fascism, as historian Brian Hanley outlines.

The most serious fascist movement to emerge in Ireland were the Blueshirts during the 1930s. At their height, the Blueshirts had as many as 48,000 members, organised across the Free State and were led by a man who Michael Collins had identified as his successor.

Although Eoin O’Duffy’s later misadventures in Spain have contributed an air of farce to his legacy, he had been recognised as a senior IRA figure in 1921 and, after a spell as a Free State Army General, he became the first Commissioner of the new state’s police force – a pedigree that was in many ways made for the leadership of a new fascist movement, which was initially made up of ex-army officers (hence its first title of  Army Comrades Association).

Despite attempts to airbrush the history of the Blueshirts by claiming that they were only a reaction to fear of Fianna Fáil and the IRA, in reality their leadership was deeply influenced by the politics of European fascism. When Éamon de Valera succeeded in gaining power in 1932 (at the head of a minority government supported by both the Labour Party and the IRA), a section of the pro-Treaty leadership shifted dramatically rightwards.

The Cumann na nGaedheal administration had been staunchly conservative to start with, but when faced with defeat in 1932, they reacted with horror at the prospect of the ‘irregulars’ of 1922 coming into office. A section of the pro-Treaty elite, among them Ernest Blythe and Desmond FitzGerald, and others such as the intellectual James Hogan (the author of Could Ireland Become Communist?) were attracted to elements of European fascist thought. Hogan, a lecturer in University College Cork and an IRA veteran, would claim that ‘it was the growing menace of the communist IRA that called forth the Blueshirts (just) as communist anarchy called forth the Blackshirts in Italy’.

These men suggested that Fianna Fáil would open the door for the IRA, and through them communism. Less ideologically, they expressed dissatisfaction with democracy on the basis that when given the choice, voters had rejected them. Added to that, the pro-Treaty grassroots, especially the large farmers, feared Fianna Fáil’s promises of land distribution and welfare expansion.

When Eoin O’Duffy was sacked as Garda Commissioner by de Valera in early 1933, he became the symbol of Treatyite resistance. Under him, the Army Comrades Association – which underwent a bewildering array of name-changes to avoid government bans – adopted the blue shirt and the right-arm salute and grew rapidly. Violence escalated as republicans and left-wingers battled the Blueshirts during the winter of 1933-34.

Links were made with fascist organisations on the continent. Even as O’Duffy was made President of the new Fine Gael party, the more staid conservatives in the ranks began to run scared of the street battles and the General’s increasingly wild pronouncements.

But Fine Gael’s conservatives moved to dump O’Duffy when the party performed badly in the local elections of June 1934 – he had promised the party would win. Later accounts stress the innate commitment of the party to democracy, but it should be noted that when O’Duffy seemed to be taking the party forward, there was less criticism of his ideas.

Now on the fringes, O’Duffy was free to expound fascism openly in the National Corporate Party. He was far from the only personality attracted to such ideas: anti-communism, anti-Semitism and admiration for variously fascism in Italy and Austria or Nazism in Germany were common trends across a range of Irish political currents during the 1930s. Fr. Denis Fahey, a member of the Holy Ghost Fathers, published – with Church approval – a range of pamphlets accusing the Jews of being behind the French and Russian revolutions and downplaying the level of oppression in Nazi Germany.

Fahey was a key influence on the American fascist demagogue Fr. Charles Coughlin, who attained a large following during the late 1930s, and his work was published in Canada by the fascist leader Adrien Arcand. But Fahey founded no political movement in the 1930s and O’Duffy’s pro-Treaty politics made him persona non grata for many republicans, including some who shared many of his ideas.

Nevertheless, the General made something of a comeback in 1936, when Franco’s coup prompted him to form an ‘Irish Brigade’ to aid fascism in Spain. There was no doubt that public opinion in the Free State was largely pro-Franco: the Catholic Church, the Irish Independent and Fine Gael hysterically so. Thousands attended rallies hastily organised by a new Irish Christian Front, left-wingers were physically attacked, while volunteers and money was pledged to Franco.

Several thousand volunteered for O’Duffy’s Brigade and about 700 reached Spain by winter 1936. But O’Duffy proved to be an unreliable and erratic leader and his men – many of them ex-Blueshirts, but also including a few IRA members and some young men who had no political background – were soon complaining of poor rations and bad conditions. Notoriously, the Irish Brigade’s heaviest losses came in a gun battle with troops from the Canary Islands: their own side. They saw limited action elsewhere and by the summer of 1937 had returned to Ireland. Retrospectively, their service compares particularly poorly with the Irishmen who fought on the Republican side.

O’Duffy slid further into alcoholism on his return, although he maintained contact with a range of pro-Nazi groups that operated in Dublin in the early years of the Second World War. In 1940, he was approached by a faction of the IRA and asked to return to political activity as an intelligence officer for them. While the defeat of the Nazis in 1945 and the exposure of the reality of Hitler’s regime meant that it was often glossed over, there was much latent sympathy for aspects of the Nazis in 1940s Ireland: independent TD Oliver J. Flanagan (later of Fine Gael) praised Hitler’s treatment of the Jews in the Dáil in 1943, while a new fascist party, Ailtirí na hAiséirghe, was one of the most active features on the political scene in Dublin during the war years.

Unlike the Blueshirts, Aiséirghe appealed to the young on the basis of ending Civil War divisions, around an aggressive programme of removing partition by force, dictatorial rule replacing inefficient democracy, and anti-communism. It held regular outdoor meetings in Dublin and sold its literature widely. It greeted the news of the Nazi death camps by claiming that they were fakes. It won nine local government seats in 1945 before imploding, but a wide range of people, including some who would be active in republican politics later had passed through its ranks. Since then, there has been no Irish fascist movement that has moved beyond the fringes.

What the 1930s and 1940s show, however, is that given the right conditions and the presence of an organisation that appeals to native traditions, the conservative Irish middle classes are not immune to the call of fascism.