Brón ar an bás – sé dubh mo croise (grief on the death, it has blackened my heart) the opening lines of Padraig MacPiarais’s poem, Bean Sléibhe Ag Caoineadh A Mic conveys the feelings one experienced on hearing of the death of Tomás Mac- Giolla. And despite the passing of time it will be many a long day before we forget Tomás MacGiolla and his unique and lasting contribution to our Party and society.

For over 60 years Tomás was active in politics, always seeking and developing new ways to achieve his and our objective of a Republic. When he became President of Sinn Féin in 1962 he, along with his close friend and comrade Cathal Goulding, undertook the mammoth task of rebuilding the republican movement not as a narrow nationalist organisation but as a socialist republican party committed to bringing about change in Irish society in which all Irish men and women would be equal and all would live and work together as Tone and Connolly envisaged.

In his many speeches down the years, most especially at the Party’s Ard Fheis, Tomás would spell out to members the current political analysis and the activities the Party would have to engage in to make the Party relevant and a power in the country. Because of his integrity and his total commitment members always took on board Tomás MacGiolla’s views and the road he sought to direct the Party.

I recall a visit to Moscow in 1973 to the Congress of World Peace when Tomás delivered a major speech to the delegates. He raised the issue of sectarianism which he equated with racism and of the need for people to recognise this fact and to combat the effects of sectarianism. He emphasised that he thought sectarianism was not just an Irish problem but an international issue citing India, Cyprus and Lebanon as examples where imperialism had left a legacy of a divided society filled with hate by one section for another.

In all the speeches that he gave and articles that he wrote a number have made a lasting impact. In the very early seventies one of his most important articles was ‘The IRA Speaks’. In it he reiterated what the IRA (Official) stood for and how important it was to have their political aims and objectives clearly stated and of how these were to be achieved. This article, along with other factors, played a major role in bringing about the Official IRA Ceasefire of 1972.

Tomás MacGiolla’s speech at Carrickmore, Co. Tyrone in July 1972 is widely regarded as one of his most important. In an epilogue to Carrickmore speech delivered in 2000, Tomás made the point in relation to the period in 1972 and I quote “The prize is freedom. Oppression is the enemy. Our weapon is the people through the Party.” And again he returns to the objective of a Revolutionary Party.

“The objective of the Workers’ Party is freedom – freedom from oppression. To achieve that we need democratic control of the means of production, distribution and exchange. Economic freedom must guarantee the right of an individual to be free from want; we must then guarantee the right of free expression, social and cultural freedom and the right to fulfilment in people’s lives. This means lifting a whole series of lids of oppression. It is for this we have been drawing on the great sources of thought and vision and action at home and worldwide in Tom Paine, Tone, Davis, Marx, Davitt, Connolly, Mellowes, Frank Ryan and Billy McMillen, to help us forge our ideology and organise our Party. With them we hungered to right wrongs, we engaged in struggle, some of our comrades died, all for that vision of true freedom”. After the betrayal of the Party in 1992 by the group styling itself as Democratic Left, Tomás played a crucial role in maintaining the integrity and organisational principles of the Party. In a major speech to Party members in May 1992 Tomás made it clear what the motivation and the aims of those who plotted the destruction of The Workers’ Party were.

He stated: “Our socialism grew from struggle and practice and the theory came later. It wasn’t until 1983 when we already had some electoral success that we established friendly relations with the CPSU. By then the Workers’ Party was already in full flower as the finest political organisation of the working class that had ever existed here. We didn’t need the Soviet Union as a prop for the Workers’ Party. Rather we were showing them solidarity as, despite the obvious corruption from the Breznev era we saw them as the only international bulwark against naked US aggression and exploitation of the Third World.

The collapse of communism in Eastern Europe was therefore quite traumatic for us in the international sense. But it had less impact on the Workers’ Party organisation and membership than many commentators thought because there was no change in the economic and social conditions which led to the building of the Party and of course our foundations were firmly rooted here! The majority of members saw that the need for the party was as great if not greater than ever though they did not recognise that the language of socialism must change, our methodology must be reviewed and also our relationship with other organisations at home and abroad. 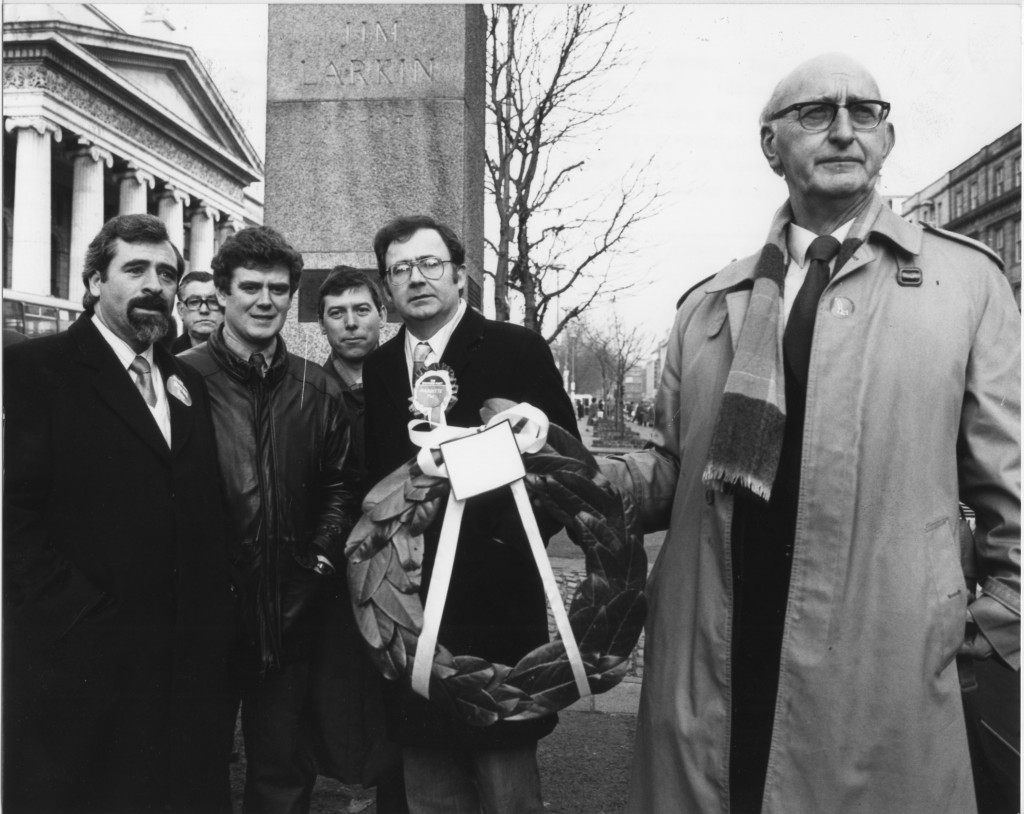 However the principles, direction and objectives of the Party were not for change. If they were to change them we would no longer be The Workers’ Party. But that is precisely what some members of the Party wanted to do. They wanted a new party of the centre, with acceptable establishment politics, with no “baggage of the past”, that is no historical roots. They obviously believe we have reached “the end of history”. Their purpose has less to do with the collapse of communism than with their own personal ambitions born out of the electoral successes of 1989. If there is some political content in the decision of the Democratic Left Party to start a new party I would like to hear it. There is so little space for them they are already standing on each others toes. Without the anchor of some political principle or objective every issue is open to debate amongst themselves with decisions made on the basis of Proinsias De Rossa’s democratic principle which is “if you don’t agree with me you are an undemocratic Stalinist”.

I know you are all looking for answers as to what happened in the Party and why it happened and how we can ensure it doesn’t happen again. I am afraid I can’t help you with all the answers. But I can tell you now that it would be very difficult to take measures to prevent it. Some people have described it as a “coup” against the party and its membership. There was of course evidence for some time of plotters and connivers in the Party we were satisfied to continue working with these people in the knowledge that the leadership and membership were quite competent to deal with any plots which might emerge. But when the President of the Party betrayed the trust given to him by the members and, together with the newly appointed General Secretary, joins the plotters, holds secret meetings around the country and coldly and deliberately plans the breakup of The Workers’ Party, there is little one can do except rely on the integrity of the members of the Party.

This is what we did. We told no lies, made up no stories, exerted no pressures on members and stole no money. But our trust was well repaid. We have clearly retained the members with the most commitment, those with the greatest integrity, those who are prepared to struggle for their class without hope of personal gain, those with both passion and compassion, the young with great idealism and older people with great hope for the future. The greatest assets of the Workers’ Party with the public have been its commitment and its integrity – its refusal to bow under pressures and attacks. Our members now can ensure that those assets are undiminished. The Workers’ Party did not bow under any pressure and did not betray anyone’s trust. Those members who did had to leave the party to do so. The trauma and the hurt, both politically and personally for me and for all members of the party has now been overcome and is already part of our history. But the work of rebuilding the party proceeds apace. A whole leadership and middle leadership must be replaced by younger people and new candidates selected for local and national elections”.

In looking back over the life of Tomás MacGiolla, as a Dublin City Councillor, Member of Dáil for ten years 1982-1992 as Lord Mayor of Dublin 1993-1994 and most especially as a member, leader, guide and teacher over many decades, we also recall his courage and commitment in the struggle for peace and a Socialist Republic; his great patience and generosity. He never shirked any challenge and he was always available to Party members and constituents to advise and assist in solving any problems. To his lifelong comrade, friend and wife May we extend our deepest sympathy on her and indeed our great loss. If we are to honour and respect the life and memory of Tomás MacGiolla we can best do this by joining in the struggle to build a society where the many are not exploited by the few. A humorous man who loved his pipe and a jar with friends and when he had a few jars you could expect to get Paul Robeson’s great song; Ol’ Man River, as we write these words I can hear him now singing; “O’ man river, Dat ol’ man river, He mus’know sumpin’, But don’t say nuthin’, He jes’ keeps rollin’, He keeps on rollin’ along.”